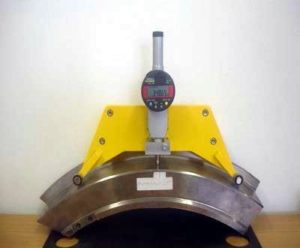 SPIDER is an electronic device designed to measure versine values and to make subsequent calculations of wheel diameters of railway and tram vehicles.

Practical applications of the SPIDER are as follows:
• Wheel checking for operational wear (wheel diameter),
• Wheel testing before re-profiling. 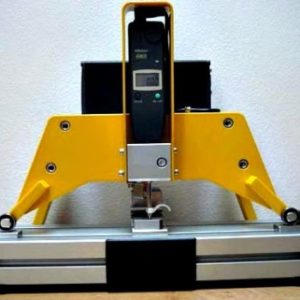 SPIDER is an electronic measuring device designed to precisely determine the wheel diameters of the railway or tram vehicles. The wheel diameter is being determined indirectly, by calculation based on the versine measured on a three-point symmetrical chord having 300 mm in length.
The rise results from a contact measurement at the distance of 70 mm (for railway vehicles), or 45 mm (for tram vehicles) away from the internal surface of the wheel rim. The measuring tip is lowered/raised manually.

The meter consist of a base plate with the bearing- fitted arms at its ends, making the two end points of the symmetric chord. A MITUTOYO sensor is at the mid point of the chord. Precise meter positioning on the wheel rim inner surface is assured by a triple of arms with their ground, hardened contact points. The bearing chord end points are fitted so that the measuring device could be could slightly be moved along the wheel being measured. A rise amount is then measured in more points to eliminate any local extremes.

The measured/calculated values of the versine/diameter are shown on the LCD display of the MITUTOYO absolute digital sensor. This sensor is supplied in two version: ID-C displayed directly diameter of wheel (SPIDER-r) or ID-U displayed measured versine (SPIDER). Sensor is able to remember the calibration zero setting, even when being turned off and on in the meantime.

A sensor tip is spring-mounted, held in transport position by a turn able stop. The
sensor is fitted so that it could be turned by 180°. Due to this arrangement the wheel can be measured from its inner and outer side. With its sensor turned, the meter must be re-calibrated on a calibrating stand (supplied complete with the meter). The calibration rests in mounting the meter on a calibration stand and zero value recording with the ORIGIN
button.

Parts of the SPIDER Meter 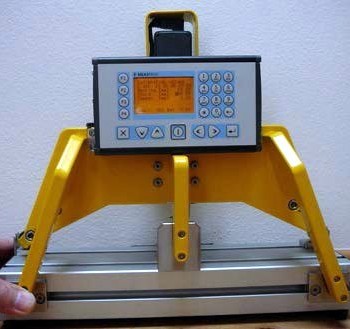 To allow the data collecting, a datalogger is mounted on SPIDER measuring device. Datalogger enables to produce a description of the measured vehicle, collection of up to 400 wheel diameter measurements, including wheel position and measurement date and time. All data are imaged on a backlighted display.